In determining our speciallity colours we had so much to choose from. Initially we wanted an offwhite that was similar to the ‘Billowing Sails’ we have used in our painted furniture up to now. Bobbie had also wanted one that was close to a robins egg blue so we choose one that was like that and we named it Bobbies Blue. I thought we needed a real true gray and real dark black and we named them Dragons Gray and Morgan’s Kitty. 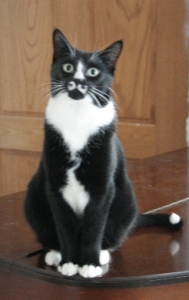 But first some of the reasoning for the black was that we take old frames that have no pictures in them and put in hardboard and paint the hardboard with ‘chalkboard’ paint. That is up to now. Now we have our own signature colour, Morgan’s Kitty which is solid black. So with this I need to deal with how we came about with the names for these two colours. Morgan’s Kitty comes from two things, one that a character named Henry Morgan was an ancestor of mine and also if he had a kitty the kitty would be black. Our own cat Tuxedo is the inspiration for the black of Stan Portley’s speciality colour ‘Morgan’s Kitty’. In fact you can see from the picture at the right he is a rather well dressed cat and even has a white shirt, white gloves and boots and evven a little bow tie on his chin. 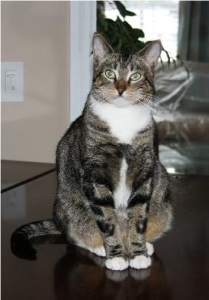 His brother Dragon is also a tuxedo cat, not because he is black, because he is gray but he has the same distinctive whiter shirt, white gloves and boots that his brother has. And if you haven’t guessed his is the inspiration for the Stan Portleys speciality colour ‘Dragons Gray’. See Dragon to the left.

But I digress, getting back to chalkboards. we have a new addition in the store. One of the projects Bobbie had been working on is a mirror which was in too bad shape to use as a mirror but we have found that the mirrors take the paint quite well and make fine solid chalkboards. See the picture below: 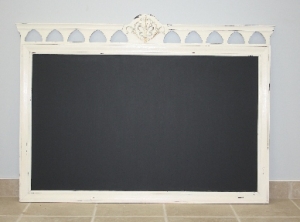 This item is actually quite heavy as mirror was a good quality mirror in its time. Other frames that we have done and can be seen posted on our website www.stanportleys.com

So till later this is John Robinson – Master Craftsman for Stan Portleys – We are timeless and unique.