Bobbie has sort of taken over the garage at the farm for her home studio. For one it is heated and as the garage is attached to the house it makes it convienient for her for other things. Although for the most part she is pretty organized she doesn’t think in the same lines as I do when it comes to getting her work area so she can work efficiently. Probably never will but it still behooves me to try and help where I can. 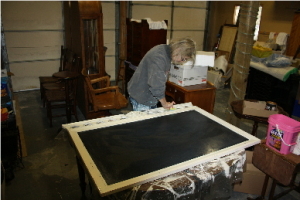 Bobbie working in her home studio

To start I put up a bunch of pegboard and gave her some pegboard hooks to use and she also purchased some herself. With this she has most of her hand tools, and other things which she requires on a regular basis. I then set up some shelving which again she has put all her ‘stuff’ and organized it, at least it must be according to her thought processes anyway.

We had a set of drawers which were on wheels and an old decrepit kitchen cart she scrounged from her sister Ann. We set up some towel bars and paper towel holders. All this has lead to her being more organized if you will. I have also set up some of my surplus saw horses so she could save her back by putting her projects up so she can work on them more ergonomically. I picked up at a garage sale a little three wheeled automotive type seat which she can sit on while she is zipping around the studio and working on the lower parts of the projects she is working on. I also built a special shelf for her to keep at least one can of each colour of vGCP Collection paint on, of course I set it up in alphabetical order for her. 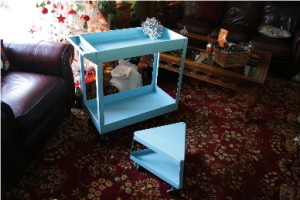 Now for Christmas I happened to be looking at the local TSC Flyer (TSC is a farm supply store) and they had red four wheeled equipment carts on for a really good price. I looked and at them and said, “Self, this is just what Bobbie needs to complete her organizing of her studio”, “She can put all the paint, wax, brushes and accessories that she needs on the cart and she can move it around the studio the area she needs it to be it.” So I did one more thing. As ‘red’ is not really Bobbie’s colour I thought that if I were to paint it a different colour, one she liked. See picture to the left. I also repainted the wheeled seat to match. She has plans on outfitting it with all kinds of organizational extras. Baskets was one thing she mentioned. She has liked this idea so much that we went out and bought two more so we would have one at one of the stores as well. Well all in all Bobbie has told me she quite likes it. Will she ever be organized like her engineer hubby. Probably not but I still say mission accomplished.