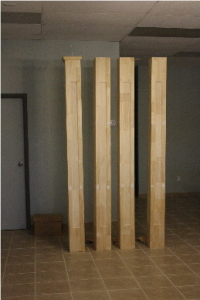 4 pillars unpainted
Well now comes the time to talk about the 4 pillars. My intitial thought with the pillars was to create a backdrop to take pictures of furniture as well as have it double as a background for any displays in the front window of our London location. See the assemble pillars to the right.

My wife also gave her two cents and made a few suggestions. She has a mantra that she uses around me when she wants to get me to agreee with her ideas by saying that I need to get into my feminine side. The reason for her saying this will be made clear later in the blog. Enough to say that she and Ann have great fun with this one at my expense and knowing what I know I try and roll with the punches but not as well as I should all the time. And of course I do get some back some myself but need to be very careful on how I do that as after all it is the two of them against me. However, it is all in fun and that is that. 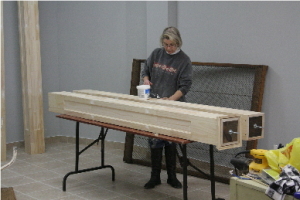 Bobbie prepping the pillars
Anyway, Bobbie, my wife and her sister Ann thought that the pillars would be a great idea. So off to the lumber yard to purchase the pillars. My wife Bobbie thought we could get away with 3 but not knowing the actual concept I had I explained and told her we needed 4. There was also a requirement for other lumber and hardware so I purchased those as well. We then took the pillars to the London store where I put them together and Bobbie painted them. See the pillars to the left here. The stand 8 ‘ high and have a 6×6 post inside for stability. Bobbie painted them our Stan Portleys ‘ Dragon Gray” and gave them a coat of the clear table top finish to boot. To the right had side you can see Bobbie prepping them for the paint by filling in the screw and nail holes. You can see this in the picture to the right the cap with the bolt through it which will provide the stability to the whole thing. 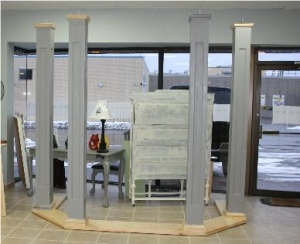 Pillars with levelling base installed
I then set the pillars up by the front window but found out a couple of things. One the floor wasn’t level and two that I would need to add some stability to the bottom of the pillars as well. You will see from the pictures to the right and below the general configuration of the base is in a u-shape. Also what you cannot see is that there are over 24 levelers on the underside of the platform so that the whole apparatus can be levelled. The platform also extends past the front pillars and this is to also provide some stability especially for when they get moved. Again the concept always was so that the whole thing could be easily moved and also taken down. The pillars at the bottom fit into a well built into the base so to reduce the chance of the pillars slipping out at the bottom. Both top and bottom of the pillars are also trimmed in a fancy moulding. 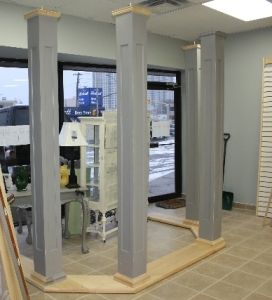 Pillars with base installed, side view.

All that is left to do is tie the top up so that it would be stable. This was done with pieces of 1X10 which were cut to fit the angles at the top. Holes were drilled in the boards and then they were bolted down. Now we get to the feminine side. I had thought of various materials that could be hung in spaces between the pillars. Carved wooden panels, or even fabric covered ones. Bobbie and Ann became involved and it came down to “we” decided that panels of sheer curtains would be ultimately appropriate to hang between the columns. Being ever ready to appease the ladies, I devised a way to hang the sheer curtains between the pillars. Open style brackets were made, angular ones for the side panels and doweling was purchased and cut to accept the curtains. Bobbie finished painting the top and bottom of the display and everything was now complete. One other thing was that Bobbie did not like the fact that I had bolts showing up through the tops of the boards on top of the pillars so a request was made to install something over the top so I purchased some finials and installed them over the bolts after having modified them. One other thing is that we are in the Lifestyle at the end of the week so “we” will be taking this down and moving it to the Western Fair District and putting it up for the backdrop of our display for the show. It will definitely be an excellent display and till then I bid you adue. This is John Robinson – Master Craftsman and Proprietor for Stan Portleys – We are Timeless and Unique.